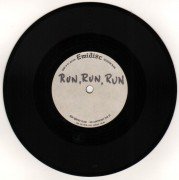 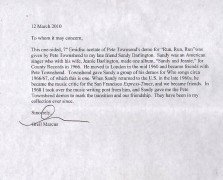 An extraordinary Who collectible–a never bootlegged original 1965 acetate of Pete Townshend’s demo of “Run Run Run,” later recorded for The Who’s second album, A Quick One (released in the U.S. as Happy Jack. This unreleased mid-60′s demo features Townshend singing and playing guitar, bass, drums; and was made to teach The Who this song.

This was Townshend’s personal acetate, which he gave circa 1967 to Sandy Darlington, an American friend/musician/music critic then living in London. In 1968 Darlington gifted it and some others to legendary music writer Greil Marcus, soon to become the first reviews editor of Rolling Stone magazine (we obtained these directly from Marcus, who has had them in his collection for 42 years.) Marcus later interviewed Townshend for Rolling Stone, and has written many notable books on Bob Dylan, as well as a number of others about Elvis Presley, Van Morrison, The Doors and music and popular culture (read about him on Wikipedia here: http://en.wikipedia.org/wiki/Greil_Marcus ). Marcus’ signed letter of provenance is included.

This demo is 3:28;  a 3:18 version has been bootlegged, but this has a different introduction, and a different mix.
The 7″ one-sided disc has some light marks, but and while visually it grades VG-, it plays EX with no pops or skips and no significant surface noise (a digital transfer is included.) This is a unique opportunity to obtain one of Pete Townshend’s personal demo acetates of a well known Who song–a truly museum quality collectible, with perfect provenance.