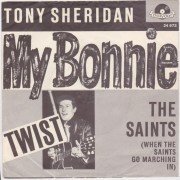 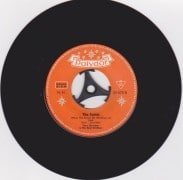 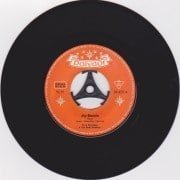 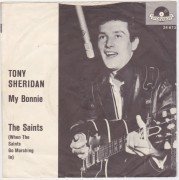 The Beatles – Their First Ever Record, “My Bonnie” By Tony Sheridan & The Beat Brothers / 1962 German First Pressing With “English Intro”

An original 1962 German pressing of “My Bonnie/The Saints” by Tony Sheridan and The Beat Brothers.  On this record The Beatles backed up English singer Sheridan, in their first-ever appearance on record anywhere in the world !

Evidently the word “Beatles” was close to the German slang word for male genitalia, “peedles”, and so Polydor Records in Germany credited Sheridan’s back up band as The Beat Brothers instead of The Beatles. This is the version with the “English intro” and “Twist” on the picture sleeve, released in January 1962 (the “German intro” version came out in October 1961.) Both are very rare. The disc here is in VG+ condition and plays without issues, and the picture sleeve is VG++, with some very minor creasing. The record that launched the Beatles.