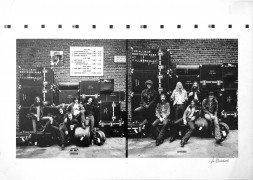 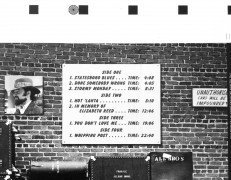 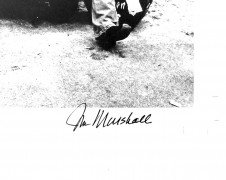 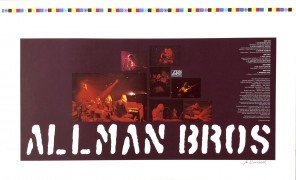 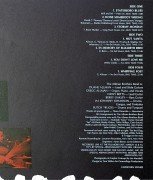 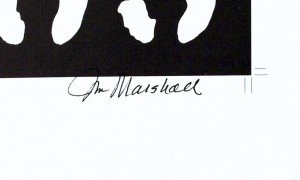 Two unreleased and alternate album cover proofs for the Allman Brothers Band’s most beloved album, At Fillmore East, both signed by the album’s photographer and art director Jim Marshall. These proofs are for the outside and inside of the gatefold album cover, and both differ from the artwork on the released album.
The front/back cover proof lists the songs in a different sequence than the band ultimately decided upon, reversing Sides Two and Three from the released version. The proof for the inner gatefold lists the songs in the same way, and features the band’s name in 3″ high letters across the bottom–which doesn’t appear on the released version. There is also a credit, “Design by Tom Wilkes for Camouflage Productions”, which doesn’t appear on the final package.

These proofs were sent to Jim Marshall for his approval, prior to the printing of album covers. Only a few sets would have been made, for the band, management, label and art director to approve. Marshall gave these to a friend, boldly signing each in the lower right corner.

The front/back cover proof measures 20″ x 29″ and is in excellent condition, with a few soft creases, two 1/4″ edge tears and a bit of aging to the top right corner. The inner gatefold proof measures 29″ x 18″ and is in near mint condition. These will frame beautifully. Truly rare and wonderful Allman Brothers artifacts from the Duane Allman era.
The late Jim Marshall was one of the most highly acclaimed music photographers ever; he was the chief photographer at the Woodstock Festival, the only photographer allowed backstage at the Beatles final concert, and shot legendary photographs of Jimi Hendrix, The Doors, Janis Joplin, Bob Dylan, the Rolling Stones, Johnny Cash and countless other music legends.  His photographs adorn more than 500 album covers including the Allman Brothers Band’s “At The Fillmore East” and the Jefferson Airplane’s “Volunteers, as well as many concert posters.