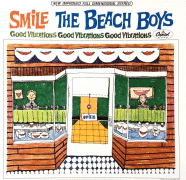 We personally acquired this from a longtime music business executive who worked in a high position at Capitol Records, among other labels. It was trimmed and mounted on art board for framing (in fact, when we purchased it, it was still in a 70’s/80’s plexi frame, but we removed it.)

We showed this to Beach Boys experts Perry Cox and Peter Reum, who both concurred this was authentic.  Reum wrote us:

“The Smile slicks that are real exist in a Duophonic for stereo version and a New Full Dimensional Stereo version…In 1978 I used the original color separation to make a run of 1000 reprints, which may be identified by a P with a circle around it and the year 1978 after it. This is in the very lower right hand corner of the reprint, below the 1966 . Given the provenance of your cover and the lack of a 1978 below, I have no doubt that yours is an original priced where I priced mine that sold. All of the 5 1966 Smile covers that I have had and sold were shortened above where the P1978 mark would have appeared.”

The colors are beautiful and unfaded (though the third “Good Vibrations” underneath the band’s name is dark green, but looks near black in the scan.) Printed in the bottom right corner is (c) 1966 CAPITOL RECORDS, INC.

We have consulted with two very experienced Beach Boys experts, who confirmed this is an authentic 1966 slick; and it comes with Recordmecca’s lifetime guarantee of authenticity. 12 3/8″ x 11 5/8″. In virtually mint condition.