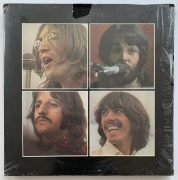 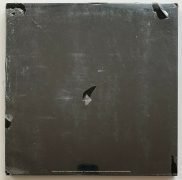 If you’ve read this far, you probably know that Let It Be was originally released in the UK by Parlophone in a box with a perfect bound book documenting the making of the album.

When found, Let It Be box sets are rarely in optimal condition.  The inner tray that held the book in place are usually torn or otherwise flattened.   Original box set copies of the Let It Be LP had a red apple logo on the back cover, while later copies sold without the box had the regular green apple–but some unscrupulous dealers replace red apple logo copies with later green apple logo covers.  The pages of the book often came loose as well, so it’s very difficult to find a copy in truly mint condition.

This example is in its original very thick factory shrink wrap and the box is in near mint condition.  There are some small tears and fraying to the shrink wrap as can be seen in the photos, and a faint number 8 (likely the original price) written on the shrink wrap, but the box is in solid Near Mint condition.  There is a small bit of lamination creasing to the bottom front center of the box, and as can be seen in the photos, light wear to the corners where the shrink wrap has split.  But this copy is by far the cleanest we’ve seen, and obviously unplayed.  Some copies had an Apple Records poster inside, but we have no way of knowing whether this one does.  An extremely rare UK factory sealed UK 1st press Beatles album with Recordmecca’s written lifetime guarantee of authenticity.