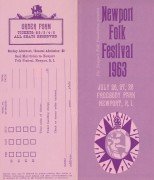 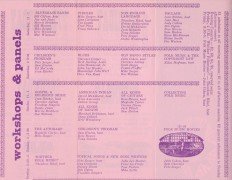 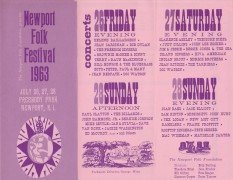 Here’s something we’ve never seen before, a handbill/ticket order form for the 1963 Newport Folk Festival, which featured performances by Bob Dylan, Joan Baez, Judy Collins, Doc Watson, John Lee Hooker, John Hammond Jr., Ramblin’ Jack Elliott, Mississippi John Hurt, Maybelle Carter and many more.  The 1963 Festival saw Bob Dylan’s first appearances at Newport; On July 26, the first day, he sang “With God On Our Side” with Joan Baez to a small workshop crowd.  That evening he performed his own set on the main stage, and returned at the end of the evening to join the night’s performers in versions of “We Shall Overcome” and his own “Blowin’ In The Wind.”   July 27 he sang “Ye Playboys and Playgirls” as a duet with Pete Seeger at an afternoon workshop, and the next night, during the final show, he joined Baez during her set to again duet on “With God On Our Side.”