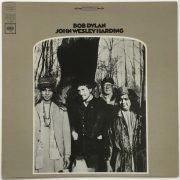 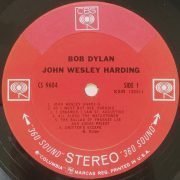 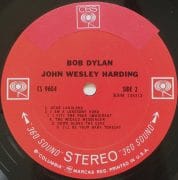 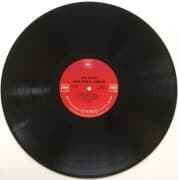 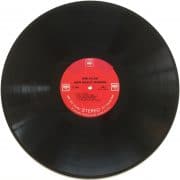 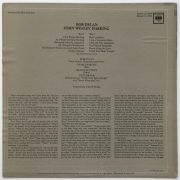 A rare 1968 first pressing of Bob Dylan’s album John Wesley Harding, pressed in the US for export to Europe.  We acquired this copy in Denmark, and have never seen another.  The record labels have a sticker with the CBS Records “eye” logo pasted over the Columbia Records logo, and handwritten matrix numbers, instead of the usual stamped numbers.

The Columbia trademark in the United States was owned by CBS, who issued Dylan’s albums on their record label, Columbia Records.  However in many other countries the Columbia name was owned by EMI, so those countries released Dylan’s albums on CBS records. This rare issue was pressed in the US by Columbia, but exported to Europe, and thus, the Columbia trademark had to be covered up.  Companies often imported US pressings when they couldn’t manufacture their own in time to meet release dates.  The definitive Dylan discography site Searching For A Gem dates this variation as being issued in January 1968.

Both cover and disc are in Near Mint condition.