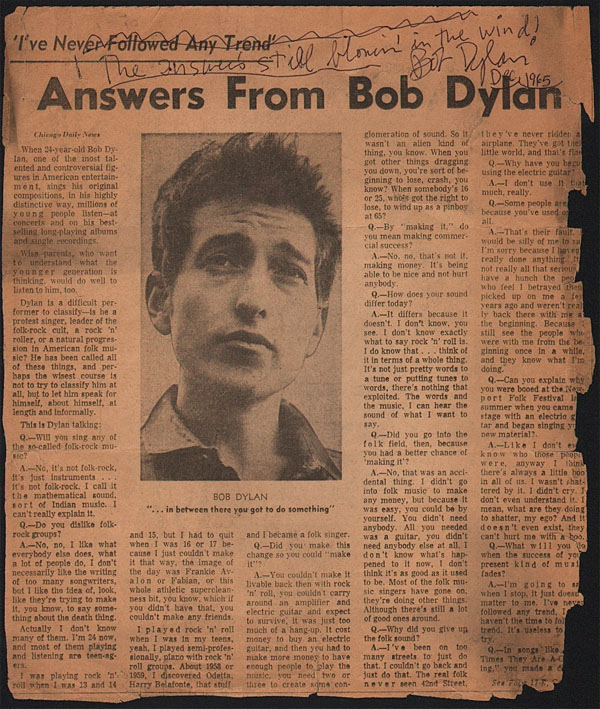 A two-page interview with Bob Dylan from the December 2, 1965 issue of the San Francisco Chronicle, autographed by Dylan and inscribed by him ‘The answer’s still blowin’ in the wind ! Bob Dylan, December 1965.’ The article, titled ‘Answers From Bob Dylan’, was syndicated by the Chicago Daily News, and in it Dylan answers a variety of questions about his motivations, current activities, early career, and folk music. While Dylan forgeries abound, this has been authenticated by former U.S. Treasury Department forensic document examiner and Dylan handwriting expert James Blanco, who compared it to more than 100 known examples of Dylan’s writing. This is the foremost authentication possible for for a Dylan piece, and costs in the neighborhood of $1000 per item examined. As with all old newsprint, the paper has yellowed; and there is some missing paper along the right edge. Dylan’s writing, however, is bold and unfaded. The second half of the article is included, and they would frame together beautifully. The signed page measures 9′ x 10 ½’. Recordmecca’s Jeff Gold is a well known Dylan expert and was a curatorial consultant and major lender to the traveling museum exhibition “Bob Dylan’s American Journey: 1956-1966.” He is a recognized expert on Dylan’s handwriting, and this comes with his written, lifetime guarantee of authenticity. A great example of an early signed Dylan piece, with the best written authentication possible.