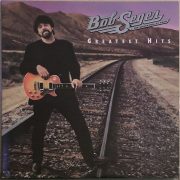 An original 16″ x 20″ photograph of Bob Seger, used in the making of his iconic Greatest Hits album, which has sold over 10,000,000 copies in the United States and has the rare distinction of a Diamond certification (10 x Platinum!).

This black and white photograph was cropped, hand colored and retouched for the cover of Seger’s 1994 album.  We obtained this original 16″ x 20″ black and white print from the album’s art director, Tommy Steele, who had it in his archives.  If you look carefully, you can see that Seger’s windblown hair has been smoothed out for the cover, and there is much more of the image here than on the cover.

Wikipedia notes “Californian photographer Karen Miller took photos of the band as part of two photoshoots for the album. The most popular pictures out of the first photoshoot were the railroad track scenes taken on the Southern Pacific railroad tracks north of Mojave, California  The single picture of Seger holding his guitar became the cover photo as well as the most recognized photograph of Seger to date.”

Our accompanying letter of authenticity will note this is an original vintage print from Tommy Steele’s archives, which is guaranteed authentic with no time limit.  A stunning print made from the original negative and used during the creation of an iconic album cover.  (Color album cover not included and shown for reference only).