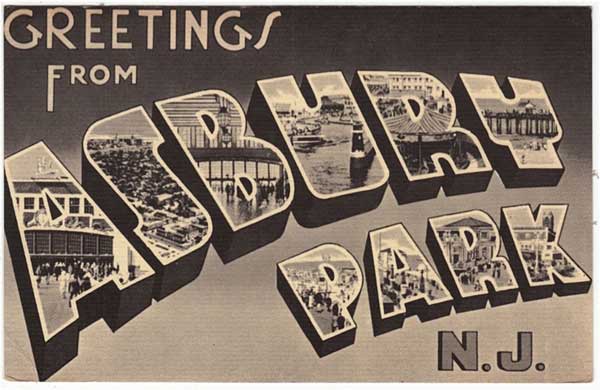 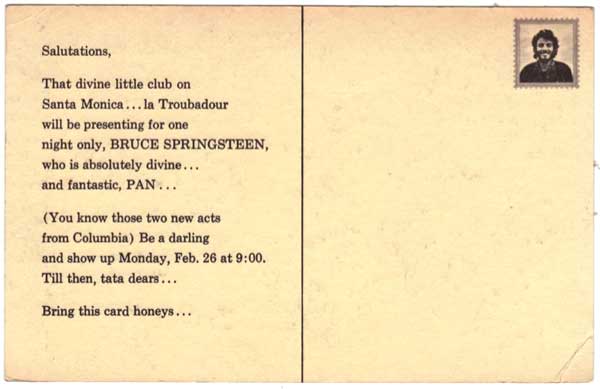 A likely unique Bruce Springsteen collectible–a postcard sent out by Columbia Records inviting the bearer to attend the first ever West Coast show by the unknown Bruce Springsteen, at West Hollywood club THE TROUBADOUR, on February 26, 1973–just two weeks after the release of the first Springsteen LP, "Greetings From Asbury Park, N.J." Bruce opened for PAN, the new Columbia act featuring Ron Elliot of the Beau Brummels. We know of no other example of this invitation (which admitted the bearer to the show.) The card measures 4 1/8" x 6 1/2", and is in excellent condition, with a crease in the lower right hand corner. We obtained this from a former Columbia Records employee, and as with everything we offer, it is guaranteed authentic without time limit.(br)According to Brucebase.org.uk, this was "ONE show, double bill, with Springsteen opening for PAN (a just-formed band headed by former BEAU BRUMMELS guitarist/songwriter Ron Elliot). This was actually 'hoot night' at the club, but some of the LA music press were present to listen to the much-respected Elliot's new outfit. A couple of songs into the set Bruce's guitar amp failed and, because minimal spares had been brought out to the west coast, the road crew were unable to fix it – so Bruce performed most of this show on piano instead of electric guitar. The four above-mentioned tracks were played but these represent only a partial setlist from this show. Springsteen's performance received brief (but positive) reviews by Billboard's Nat Freeland and LA Free Press journalist Peter Jay Philbin. Also in the audience to watch Bruce was soul singer Jerry Butler, who was about to begin a 6-night stint at the club, starting the following evening. THERE IS NO CIRCUALATING AUDIO."(br)Another online mention we found notes Springsteen's first Troubadour appearance was a six song set at a Hoot night, of which the L.A. Free Press said: "It was Bruce Springsteen who made the crowd collision, the stepped on toes, the smoke-pained eyeballs, the walk away from the TV set all worthwhile…never have I been more impressed with a debuting singer than I was with Bruce Springsteen on Monday night."(br)A truly museum quality Bruce collectible–perhaps the only surviving copy. SOLD