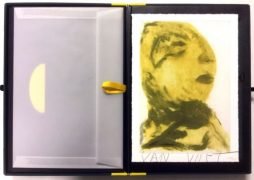 A copy of the long-out-of-print Don Van Vliet (a.k.a. Captain Beefheart) box set Riding Some Kind of Unusual Skull Sleigh, ordered and sent to Flea of the Red Hot Chili Peppers.

This extraordinary box set contains a Van Vliet hand-signed etching (this example #275/1500), two books, “Splinters” (with photos, artwork, lyrics and cuttings; 96 pages) and “Riding Some Kind of Unusual Skull Sleigh” (60 color plates of Van Vliet’s artwork and an essay by Ben Watson; 88 pages), a CD of 11 song fragments/poems sung, recited and whistled by Van Vliet, and a DVD of Anton Corbijn’s short film on Van Vliet, Some Yo Yo Stuff.   This copy is unused and in mint condition, with just a bit of light foxing to the clamshell box.

We obtained this copy from longtime Chili Peppers employee and former road manager Louie Mathieu, who noted Flea had ordered this, but before it arrived he had saw another copy and bought it.  When this copy arrived, Flea gifted it to Louie, who kept it unopened until selling it to us.  Included is the original shipping box with Flea’s name and the address of their management office (blurred out on the scan here.)

Don Van Vliet aka Captain Beefheart was a visual artist before he was a musician. As a young child he drew serious accolades for his animal sculptures and was offered a scholarship to study in Europe. His parents declined; and while continuing to create in the visual medium, Van Vliet turned his attention to music, within ten years forming the first incarnation of the legendary experimental outfit Captain Beefheart and His Magic Band. The following 15 years are music history.

But in 1983 Van Vliet retired from music to pursue painting and drawing, the focus of this extraordinary boxed set. Riding Some Kind Of Unusual Skull Sleigh, named after a painting the artist completed in 1987, provides an opportunity to own one of his original, signed color etchings.

More details and close up photographs can be seen here:  http://www.beefheart.com/rhino-box-set-riding-some-kind-of-unusual-skull-sleigh-by-don-van-vliet/