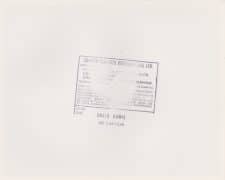 David Bowie – 1963 Photograph of Bowie’s With Singers In First Band, The Konrads

A rare 1963 photograph of David Bowie (right) with singers Roger Ferris, and Stella and Christine Patton from his first band, The Konrads. Bowie (then using the stage name David Jay) was initially the band’s saxophonist, but took over as lead singer when the band’s frontman cut his foot on broken glass at a pub gig.  This photo was taken in February 1963 during a Konrads photo session with photographer Roy Ainsworth in Stepney Assembly Rooms in East London.

From Wikipedia: In 1962 Bowie formed his first band at the age of 15. Playing guitar-based rock and roll at local youth gatherings and weddings, the Konrads had a varying line-up of between four and eight members, (Bowie’s lifelong friend George) Underwood among them.  When Bowie left the technical school the following year, he informed his parents of his intention to become a pop star. His mother promptly arranged his employment as an electrician’s mate. Frustrated by his bandmates’ limited aspirations, Bowie left the Konrads and joined another band, the King Bees.

This is an original hand-printed photograph, made from the original negative, probably in the 1970’s or 80’s.  It is from the archives of the London Features stock photo agency, which licensed photographs to magazines and newspapers on behalf of photographers. On the back is the London Features copyright/credit stamp. 8” x 10”, in excellent condition with a small scuff to the left of Roger Ferris’s leg.