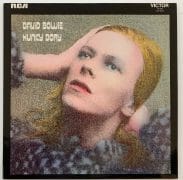 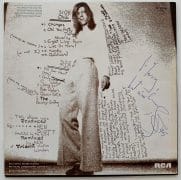 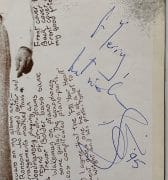 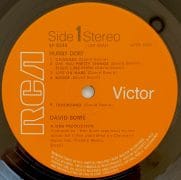 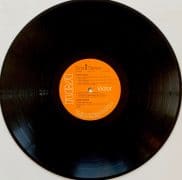 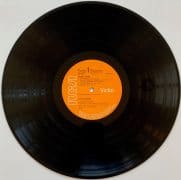 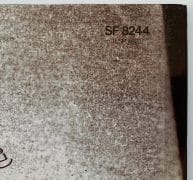 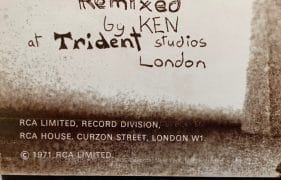 An extraordinary autographed UK 1st Pressing of David Bowie’s classic 1971 album Hunky Dory, with the laminated front cover and earliest credits, in Near Mint/Near Mint condition.  David Bowie has boldly autographed the unlaminated back cover “For Terry, Best Wishes, Bowie ’95”.  This highly sought after album is extremely rare in any condition, and a copy this nice is worth $2000. unsigned.

Hunky Dory was Bowie’s first album for RCA, and only the very first copies had a laminated front cover and spine, and lacked the text “A Gem Production” on the top right corner of the back cover.  The earliest discs credited the publishing to “Chrysalis Music Ltd/Titanic Music”, had 3T stampers, and the words “Bobil” and “Rasputin” etched into either side of the disc.  This example has all of the above; the disc looks possibly unplayed, and if it has been played, we’d guess it was no more than once or twice.  The cover looks new, with only a few minor lamination creases–but these could have been a result of handling at the factory.  (The insert is not included, but easily obtained from a later copy).

Bowie autographed this album in 1995 for a photographer from the Cape Town Press, while visiting the South African city with his wife Iman.  The photographer was shooting the couple, and afterward went home to get his album, which Bowie graciously signed.

The autograph has been authenticated by music autograph expert Roger Epperson; his signed letter of authenticity is included, along with Recordmecca’s written lifetime guarantee, and print outs of information on the photographer, three of his pictures of Bowie and Iman, and an email from his nephew, from whom we acquired the album.  An extraordinary opportunity to obtain a signed copy of 0ne of Bowie’s rarest records.