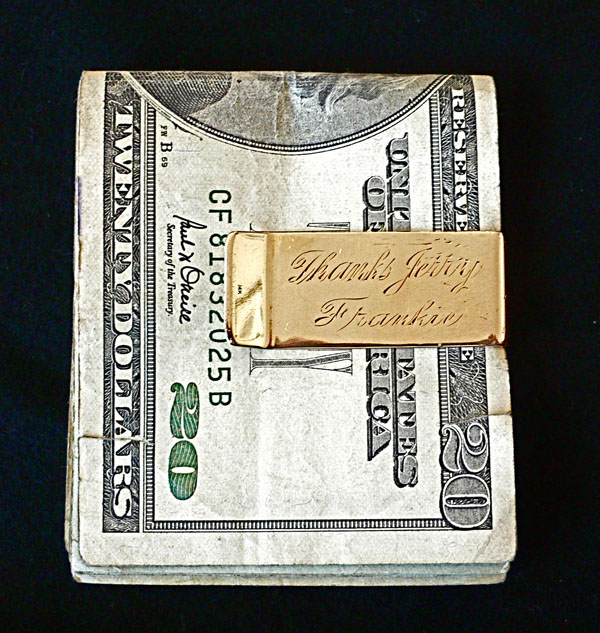 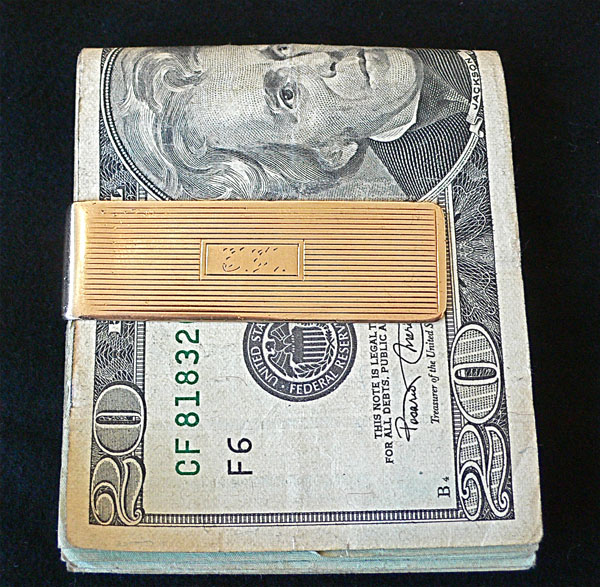 An amazing Frank Sinatra collectible–a solid gold Money Clip engraved "Thanks Jerry, Frankie" and given by Sinatra circa 1944 to the announcer of his radio program "The Frank Sinatra Show," Jerry Lawrence. Sinatra's career took off because of his early radio programs, offering him regular exposure to a public starved for entertainment in the pre-television era.(br)Jerry Lawrence was a New York disc jockey who played Sinatra's early solo records in defiance of the Dorsey Brothers' wishes, and as a result became friends with Sinatra. He was hired to be the announcer on "The Frank Sinatra Show" in 1944. Lawrence was a frequent presence on radio and television in the early days, as an announcer and sometime actor.(br)We obtained this from Tony Lawrence, Jerry Lawrence's son and a record industry executive. His letter of authenticity, which is included, reads "This letter is to authenticate a solid gold money clip given to my father, Jerry Lawrence. He was a successful dj/announcer in New York at the beginning of Frank Sinatra's career. They became friends and in appreciation of my dad's playing of Sinatra's early records in defiance of the Dorsey Brothers wishes, Sinatra gave him this 14K gold money clip engraved "Thanks, Jerry, Frankie." Dad carried it with him always. He passed away in 2005. Sincerely, Tony Lawrence." Also included is a copy of the Los Angeles Times obituary of Jerry Lawrence, noting his Sinatra connection. The money clip is in well used condition with a number of nicks, but as you can see the all important engraving is easily readable and bold.(br)This is a unique opportunity to obtain a rare piece of Sinatra memorabilia from the beginning of his career, with perfect provenance. As with everything we offer, this is guaranteed authentic in writing without time limit. The cash in the photograph appears for demonstration purposes only, and is not included with the money clip.