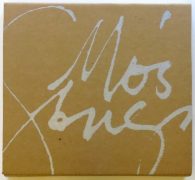 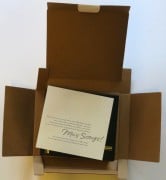 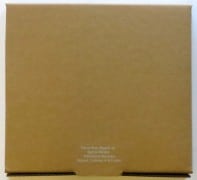 An unplayed mint condition copy of the first printing of “Mo’s Songs”, the 1994 6 CD promo only tribute to former Warner Bros. Records chairman Mo Ostin, featuring George Harrison’s otherwise unreleased song written in honor of his close friend Ostin, titled “Mo.” This is a 5 minute, fully produced track that Harrison cut and gave to Ostin, and was later used on this tribute exclusively.

The elaborate package contains a bound in booklet written by ex- Warner Bros. exec Stan Cornyn, and six CD’s of Warner Bros and Reprise tracks by artists the legendary Ostin worked with.

This package was co-produced by Recordmecca’s Jeff Gold. Fewer than 1000 of these were made, for distribution to Warner Bros. employees and friends, and fewer still had the cardboard mailer and insert, which this copy includes. Everything here is in mint condition, and the CD’s have never been played. The package was later (and more cheaply) reproduced for the Grammy Award’s Salute to Icons Award (which Ostin received in 2006.) These “reissues” contained CD’s inserted into a think board slipcase, without the book binding and booklet that this original has.

A fantastic tribute to Mo, Warner Bros., and the great acts they brought to market–not to mention a fantastic unreleased George Harrison track !