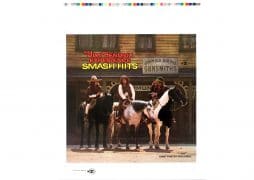 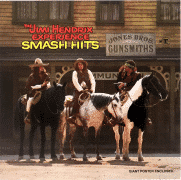 A rare album cover proof with unreleased alternate artwork for the Jimi Hendrix Experience’s 1968 album Smash Hits. Warner Brothers art director Ed Thrasher shot this photograph of the Experience on horseback, planning to use it for Hendrix’s third album (released only 4 months after “Axis, Bold As Love.”) Prior to the album’s release, however, this artwork was scrapped in favor of the classic triple-exposure image of Hendrix.

This is one of a few original proofs produced by Hendrix’s label Reprise in 1968, before the artwork was changed.  These were discarded by the label in circa 1975, and rescued from a dumpster by an enterprising employee. In near mint condition.  24 1/2” x 17 3/4”; image 12 1/2” x 12 3/4”.  (Note: In 2016 Legacy Recordings reissued Smash Hits with this cover for Record Store day, in a limited edition of 5000.  The artwork was made from a scan of a proof obtained from Recordmecca ).