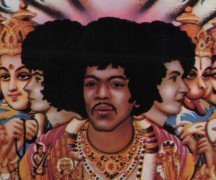 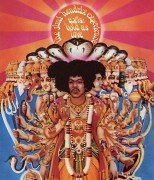 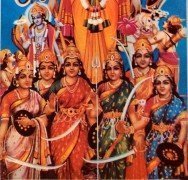 An exceptionally rare album cover proof for the original 1967 UK  issue of Jimi Hendrix’s Axis Bold As Love, signed by cover designer David King.  King, art director for the (UK) Sunday Times magazine during the 1960’s,  was friendly with Track Records co-founder (and Who co-manager) Chris Stamp, who occasionally commissioned him to design album covers for the label.  These included some of the most memorable sleeves of the 1960’s: Hendrix’s Axis: Bold As Love and Electric Ladyland, The Who Sell Out, and The Crazy World of Arthur Brown.

Cover proofs were made by a record label’s printers, so art directors and the label could approve artwork before mass-producing finished album covers.   We obtained this proof directly from David King, who had stored it in his archive since 1967.   He described to us how he (collaborating with illustrator Roger Law) based the Axis cover on a poster of a Hindu devotional of a painting titled Viraat Purushan-Vishnuroopam.  King bought the poster in a London store and hired a ‘technical illustrator’ to paint the heads of Hendrix, Noel Redding and Mitch Mitchell to match the painting,  then superimposing them on top of the three central figures in the image.

Looking carefully, one can see slight differences in the proof that were fixed for the finished album cover, particularly where Mitch Mitchell’s nose and lips have multiple lines that were retouched out before finished album covers were produced.  The proof measures 24 7/8″ x 12 1/4″ and is in beautiful near mint condition.  King has signed it in pencil on the back “Album Cover Proof 1967, David King.”  Proofs were expensive to make and no more than a handful would have been produced; they were generally discarded after finished covers were printed.  A truly museum quality Hendrix collectible that will look spectacular framed.