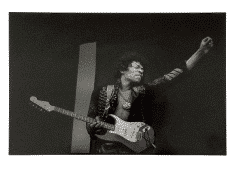 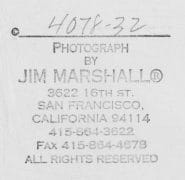 A superb and very large hand printed 16″ x 20″ original silver gelatin photograph of Jimi Hendrix by the legendary Jim Marshall.  Taken during the sound check at the 1967 Monterey Pop Festival (Hendrix’s first US show) this is one of Marshall’s classic images.

This huge print is in mint condition, with Marshall’s studio stamp and negative number on the reverse.  In the second photo, the print is pictured alongside Hendrix’s classic “Electric Ladyland” LP so you can get an idea of just how large this beautiful print is (the album,  placed alongside the bottom of the photograph’s border,  measures 12 1/4″ square, is shown for comparison only and not included.)

The late Jim Marshall was one of the most highly acclaimed music photographers ever; he was the chief photographer at the Woodstock Festival, the only photographer allowed backstage at the Beatles final concert, and shot legendary photographs of Jimi Hendrix, The Doors, Janis Joplin, Bob Dylan, the Rolling Stones, Johnny Cash and countless other music legends.  His photographs adorn more than 500 album covers including the Allman Brothers Band’s “At The Fillmore East” and the Jefferson Airplane’s “Volunteers,”  as well as many concert posters.