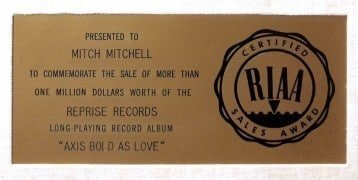 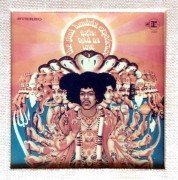 This was Mitchell’s personal award, owned by him since received from Reprise Records, and acquired by Recordmecca directly from his widow, Dee Mitchell.  Original white matte awards are highly sought after, and this one, presented to the legendary drummer and longtime Hendrix collaborator, is truly extraordinary.  This award is completely original and has never been opened or restored; it has the original backing paper and NY Frame & Picture Company sticker.

In overall excellent condition, with the expected small nicks to the frame and small tears to the backing paper.  With Dee Mitchell’s letter of authenticity, and Recordmecca’s written lifetime guarantee.  17 3/4″ x 21 1/2″.