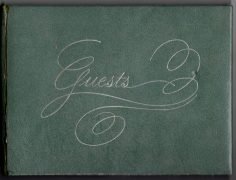 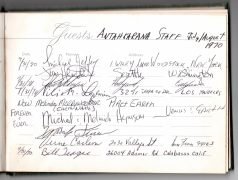 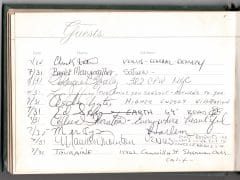 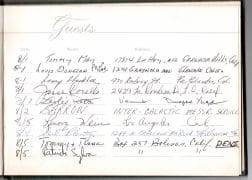 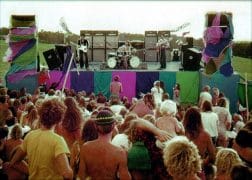 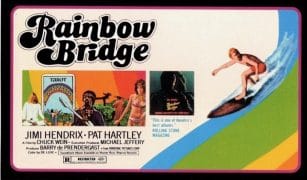 The guest book from Seabury Hall in Maui, Hawaii, signed by Jimi Hendrix and 27 members of the cast and crew of the film Rainbow Bridge.  Seabury Hall was a private girl’s school which was closed during summers; it was rented for the months of July and August 1970 for $3,000. by Hendrix’s manager and Rainbow Bridge producer/mastermind Michael Jeffery.

During nearly the entire month of July 1970, Hendrix and the movie’s cast and crew stayed in Seabury Hall, filming at various locations in and around the school. Hendrix’s scenes were shot there, and his concert sequences filmed just a few hundred yards from the school. Rainbow Bridge was a passion project for Hendrix manager Jeffery, who co-produced the film, and hired Warhol associate Chuck Wein to direct.  Hendrix biographer Harry Shapiro says “the idea was to shoot an antidote to Easy Rider, showing the positive side of the youth movement.”  Wikipedia describes it as a “loosely documentary-styled film, centered on the experiences of a New York model [Pat Hartley], who travels from San Diego to an occult center on the island of Maui, Hawaii” where “she encounters various devotees of surfing, clairvoyance, zen, yoga, meditation, Tai-Chi, and the odd ufologist. As it unfolds, a free concert by Jimi Hendrix is staged in a former pasture…and a few hundred island hippies, surfers, and local residents show up to witness the event”. The concert, titled the ‘Rainbow Bridge Vibratory Color Sound Experiment’, was filmed on June 30 in front of an invited audience.

Hendrix reportedly very much enjoyed his time on Maui, and Les Potts, a local involved in the production who appeared in the film, said “I remember the day Jimi was leaving Maui.  He looked at us with tears in his eyes and said ‘You guys are so lucky. You get to stay’”.  Hendrix flew straight to Honolulu, where he played a concert at the International Center on August 1; it was to be his last performance in the United States. He died less than two months later.

The guest book is filled with the names and addresses of visitors to Seabury Hall, but the most important of these are three pages headed “Antahkarana Staff July/August 1970”.  Antahkarana was Michael Jeffries production company.  Jeffries and Hendrix were the first to sign the book, arriving July 1, with the last crew members signing August 5.  The 28 members of the cast and crew who signed the book (and wrote their address, real or imagined) are:

A museum quality Jimi Hendrix collectible, from near the end of his life.  Included is a photograph of Hendrix’s Rainbow Bridge concert, a small photographic reproduction movie advertisement, a letter of authenticity from music autograph expert Roger Epperson, and Recordmecca’s written lifetime guarantee of authenticity.