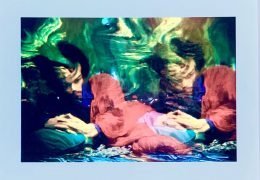 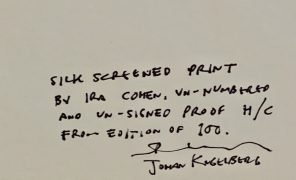 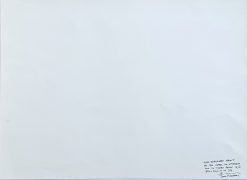 A beautiful limited edition silkscreen print of Jimi Hendrix “in the mylar chamber” by the late artist/photographer/publisher/poet and filmmaker Ira Cohen.

Cohen (1935-2011) photographed numerous musicians, poets and artists in a mylar room he built in his New York loft. He shot Hendrix in 1969, and the guitarist told Cohen “looking at your pictures is like looking through butterfly wings.” Cohen’s mylar photographs appear on a number of album covers, including John McLaughlin’s Devotion and Spirit’s Twelve Dreams of Dr. Sardonicus. This photograph was included in the traveling show The Jimi Hendrix Exhibit, and was used as part of the artwork for the CD The Ultimate Experience.

This 15 1/2″ x 21 1/4″ print is silkscreened on mirror-like mylar (the photo here doesn’t do it justice).  Cohen’s archivist, Johan Kugelberg,  noted this was a proof from Cohen’s unfinished edition of 100, writing on the back “Silk screened print by Ira Cohen, un-numbered and un-signed proof.  H/C from edition of 100.”

Included are copies of Cohen’s account of the photo session and a 1980 letter from the Hendrix Information Center to Cohen. A spectacular image in virtually mint condition.