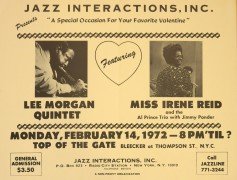 A rare boxing-style concert poster advertising a Valentine’s Day concert with the Lee Morgan Quintet on February 14, 1972, at Top of the Gate in Greenwich Village, New York.  This was only five days before Morgan’s tragic death, on February 19. Also on the bill was Miss Irene Reid, a jazz vocalist who toured with Count Basie.

From Wikipedia: Morgan was killed in the early hours of February 19, 1972, at Slug’s Saloon, a jazz club in New York City’s East Village where his band was performing.[4] Following an altercation between sets, Morgan’s common-law wife Helen More (a.k.a. Morgan), shot him. The injuries were not immediately fatal, but the ambulance service was reluctant to go into the neighborhood where the club was located. They took so long to get there that Morgan bled to death. He was 33 years old.

In near mint condition with long flattened vertical crease down the middle, barely visible.  17 1/2″ x 22 1/2″.  Vintage jazz posters are scarce and this one is both historic and a classic.