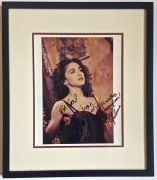 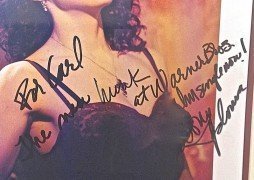 A beautiful framed 11″ x 14″ original color photograph (hand printed, not machine printed) inscribed and signed to a Warner Bros. Records executive by Madonna. Recordmecca’s Jeff Gold is a former executive vice president at Warner Bros.Records and acquired this directly from a former co-worker, who was given this by Madonna.

The photograph is boldly signed in black marker “For Carl, The new hunk at Warner Bros. I’m single now ! Love, Madonna”. The photograph is in perfect condition and has been expensively framed to 19″ x 22″; the frame is in excellent condition with one light scuff.

Because demand for Madonna autographs was so high at least two Warner’s employees regularly signed for her, and of course the internet is filled with forgeries. But this is the real thing, inscribed and signed by Madonna herself, with Recordmecca’s lifetime written guarantee of authenticity. Beautiful