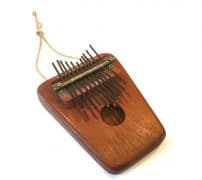 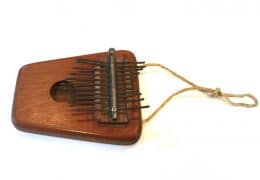 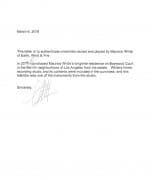 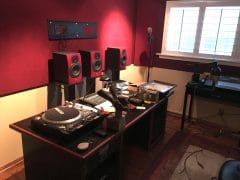 A Kalimba [an African musical instrument] owned and used by Earth, Wind and Fire founder and leader Maurice White.  As the website Kalimba  Magic notes, many “were first exposed to the instrument when Maurice White of the band Earth, Wind and Fire pierced their hearts with its sound so many years ago, first beginning in the 1970’s…White seemed to approach the kalimba as a magical device that could pierce through anyone’s armor and transport them to a place of love and beauty and amazement…”

White is the most famous kalimba player ever, and was so attached to the instrument that he named his production company Kalimba Productions and his record label Kalimba Records.

We acquired this instrument from an entertainment business manager who purchased White’s home. His included letter of authenticity (we’ve blurred out his name on the scan here) reads:

This letter is to authenticate a kalimba owned and played by Maurice White of Earth, Wind & Fire. In 2018 I purchased Maurice White’s longtime residence on Baywood Court in the Bel Air neighborhood of Los Angeles from his estate. White’s home recording studio and its contents were included in the purchase, and this kalimba was one of the instruments from in the studio.”

In the photos of White’s home studio here the kalimba is clearly visible on the mixing desk.  The wood and metal instrument is in excellent played condition, and measures 6″ x 7″ x 2″.  A unique opportunity to own an instrument played by a Soul music legend and member of the Rock and Roll Hall of Fame. With the letter from the purchaser of White’s house, copies of photographs of the home studio with the kalimba visible, and Recordmecca’s written lifetime guarantee of authenticity.