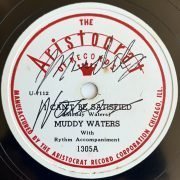 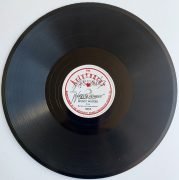 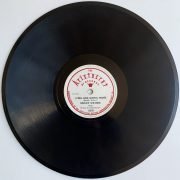 A 1948 Aristocrat Records 78 of Muddy Waters’ debut under his own name, “I Can”t Be Satisfied/I Feel Like Going Home”, signed boldly by the blues giant.

In 1941, folklorist Alan Lomax recorded Waters at his home in Stovall, Mississippi, resulting in a single 78 issued under his real name, McKinley Morganfield, by the Library of Congress.  According to Wikipedia, in 1943 Waters headed to Chicago with the hope of becoming a full-time professional musician….[in 1946] he began recording for Aristocrat Records, a newly formed label run by the brothers Leonard and Phil Chess. In 1947, he played guitar with Sunnyland Slim on piano on the cuts “Gypsy Woman” and “Little Anna Mae”. These were shelved [but later released] but in 1948, “I Can’t Be Satisfied” and “I Feel Like Going Home” became hits, and his popularity in clubs began to take off.  Soon after, Aristocrat changed its name to Chess Records.  Waters’s signature tune “Rollin’ Stone” also became a hit that year.

This historic 78, his first solo release as Muddy Waters, is boldly signed in black ballpoint pen across the A-Side label.  The only signed Muddy Waters 78 we’ve had.  In Very Good condition, with Recordmecca’s written lifetime guarantee of authenticity, and a second letter of authenticity from RRAuction.