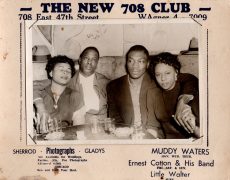 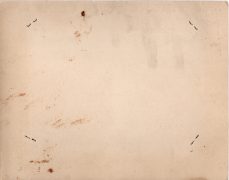 A circa 1955 souvenir photograph of two couples at Chicago’s New 708 Club.  Many clubs during the 1940s and 50s had in-house photographers who would photograph patrons, develop them on-site, and make them available to patrons before the end of the evening for a dollar, an inexpensive souvenir of a night out.

The photograph is stapled to a pre-printed cardboard card, noting the club featured blues giant Muddy Waters every Monday, Wednesday and Thursday, Harmonica legend Little Walter on Tuesdays, and blues saxophonist Ernest Cotton on Fridays, Saturdays and Sundays.  Waters played the 708 in 1955, and this likely from that time.

This legendary club played a critical role in the discovery of blues guitar giant Buddy Guy.  In 1958 the then-unknown Guy was taken by a stranger to the 708 Club, where he sat in with guitarist Otis Rush; the club’s owner was impressed and according to Guy,  “He started telling people there, ‘I don’t know who the hell that is, but hire him.’” A story in the Daily Beast notes, “The owner went one step further and rang Muddy Waters, arguably the most esteemed figure from the mid-century Chicago blues scene. Upon leaving the stage, Guy was escorted outside to a cherry-red station wagon, where Waters greeted him with a freshly sliced salami sandwich. During their talk, Guy confessed to Waters that he was thinking of asking his family to loan him money for a ticket back to Louisiana, but Waters assured him that was no longer necessary. He had just made a home for himself in Chicago.”