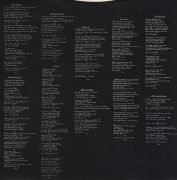 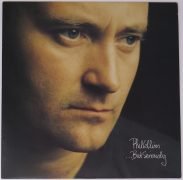 Phil Collins’ original handwritten lyrics to song “Find a Way to My Heart”, written out by Collins for use on album artwork for his international hit album … But Seriously.  These exact lyrics  are reproduced on the inner sleeve to the worldwide #1 album, as illustrated here (Collins wrote out the lyrics to each of the songs on …But Seriously for the album’s innersleeve, also handwriting the liner notes and even his name and the album title.)  The page measures 9 1/8″ x 11 1/2″.  Also included is an uncropped original photographic print of the album cover shot, measuring 3 1/4″ x 4 1/8″. Half time

From Wikipedia: …But Seriously is the fourth solo studio album by English rock musician Phil Collins.  It was released on 20 November 1989, becoming the best-selling album of 1990 in the UK. It reached No. 1 in the UK and US for fifteen and three nonconsecutive weeks respectively. The album has been certified quadruple platinum in the US and nine times platinum in the UK. It also produced five Top 40 singles in both countries…and is one of the best selling albums in British, Spanish, French and German history.

From the collection of a former record company executive who worked on the project.  A truly museum quality collectible; with Recordmecca’s written lifetime guarantee of authenticity.  [Album cover show for illustration only, not included.]