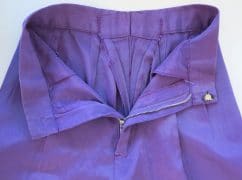 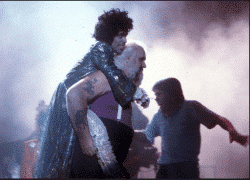 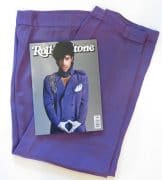 A pair of purple grosgrain custom-made pants owned and worn circa 1982-1985 by Prince.  These pants are identical in color and fabric to a jacket Prince wore during a photo session with legendary photographer Richard Avedon on December 22, 1982 (which later appeared on the cover of Rolling Stone’s Prince memorial issue.)

As detailed in the accompanying letter of provenance, these pants were part of group of Prince’s clothes dropped off by Prince’s longtime bodyguard, Big Chick Huntsberry, at a Minneaopolis area dry cleaners in 1985.  The letter notes “The articles of clothing were never picked up; many attempts were made to contact Charles (Big Chick) to no avail.  Charles Huntsberry did leave Prince’s employ sometime in 1985.  This may be the reason the clothing was never claimed.”  It notes that the cleaners had a policy that clothing not claimed after one year was to be discarded or donated.  We purchased these pants from a former employee of the cleaners who had kept them since 1986.

The pants are custom made, with a tiny 25″ waist, a 26 1/2″ inseam and an overall length of 38″.  The construction is very detailed, and even the zipper pull was painted purple originally (some of the color has chipped off).

Recordmecca owner Jeff Gold is a former Executive Vice President/General Manager of Warner Bros. Records, who worked closely with Prince during the 1990’s, and art directed numerous album covers for him, including “Diamonds & Pearls”, “Love Symbol” and “The Hits/The B-Sides”. Gold’s account of working with Prince can be seen at http://recordmecca.com/news/working-with-prince/.

Included is the letter of authenticity from the dry cleaner employee (her name and other personal details have been erased from the scan for her privacy, but not the original letter) and a Letter of Authenticity from Jeff Gold with Recordmecca’s lifetime guarantee of authenticity. An exceptional Prince collectible with superb provenance.  (Note: We contacted the Richard Avedon foundation, who told us Avedon destroyed all the negatives he didn’t deem worthy of use, and consequently, no record of whether Prince wore these pants with the matching jacket exists.)