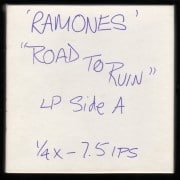 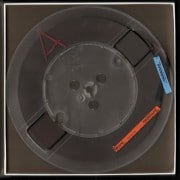 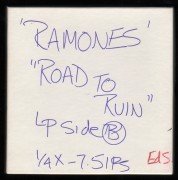 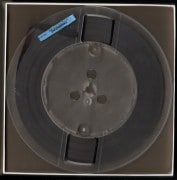 A truly incredible Ramones collectible–an original master copy (on two 7″ reels) of the mix down tapes for The Ramones 1978 album ROAD TO RUIN. These were made directly from the unmastered mix tapes by the album’s co-producer/engineer/mixer, Ed Stasium for his reference while working on the album.

As Stasium writes in his letters of authenticity (two included here, one for each reel) these were made at Mediasound Recording Studios, and the sequence here differs from the released album (the sequence was changed after the album was mixed–at which point this tape was made–and before the album was mastered.) The quality here is absolutely incredible, coming directly from the unmastered mix down tapes.

We acquired these directly from longtime Ramones producer/engineer/mixer (and all around great guy) Ed Stasium, and included is are his signed letters of authenticity, as well as a high resolution digital transfer on CD made by Ed.

As Ed explains in another accompanying document, tapes from the 1970’s need to be “baked”–or heated in a controlled envoirnment–before playback; the binder used to attach the magnetic particles to the backing can be unstable after many years. Ed baked this tape before transferring it digitally in his recording studio; we suggest the owner not try to play it.

This auction is for this tape, transfer and documentation, sold as a collectible only. No rights of reproduction or copyright are included or inferred. As illustrated below, we have commissioned a frame for this tape which can be hung on the wall or displayed on a table. The frame can easily be slid open and the tape removed. The frame is shown only as an example of how this tape might be displayed and is NOT INCLUDED but can be ordered separately.

A unique opportunity to obtain a truly one-of-a-kind Ramones collectible.