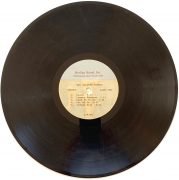 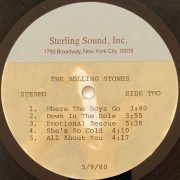 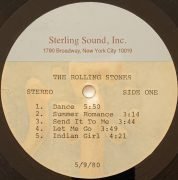 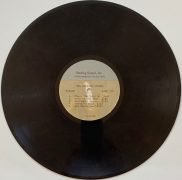 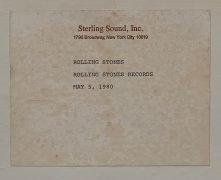 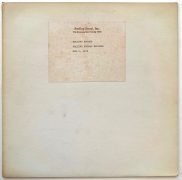 An alternate acetate of the Rolling Stones Emotional Rescue album, from the estate of Earl McGrath, ex-president of Rolling Stones Records.   This acetate has a more than one minute longer version of “Dance (Pt. 1)” and a slightly longer version of “Where the Boys Go”.   There are likely differences in the final mix and EQ as well.  This acetate is dated 5/9/80; the album was released nearly six weeks later on June 20, 1980.

The accompanying letter of authenticity from author Joe Hagan explains, in part, This acetate was part of a collection belonging to the late Earl McGrath, vice president of Atlantic Records, president of Rolling Stone Records, and manager of the Rolling Stones, 1977 to 1983.  It was initially housed in the walk-in closet in Earl’s apartment, where he kept his personal record collection, studio tapes, acetates and test printings… As the author of a biography on Rolling Stone magazine founder Jann Wenner, I interviewed Earl McGrath…[and] after Earl died in 2016…I acquired his studio tapes, acetates and test printings from the Camilla and Earl McGrath Foundation.”

The acetate lineup is:

The disc is in VG++/VG+ condition; and plays well with occasional light surface noise.  Cut at Sterling Sound , with generic sleeve with label.  Includes letter of authenticity from Joe Hagan, Card from the Earl McGrath estate, and Recordmecca’s written lifetime guarantee of authenticity.

An extraordinary Rolling Stones collectible, with impeccable provenance.  [Acetate collectors should note that a good percentage offered online are recent forgeries; any honest seller should be happy to offer a written lifetime guarantee.]