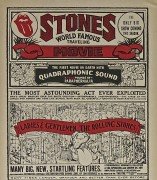 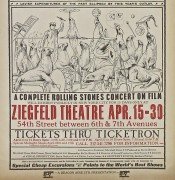 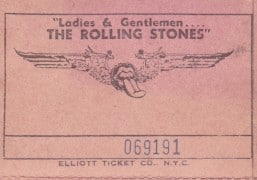 A beautiful poster and unused ticket for the April 1974 premiere of the concert film “Ladies and Gentlemen, the Rolling Stones.”  This film captured the Stones at their live peak, during their 1972 North American Tour to support the newly released “Exile on Main Street” (four shows were filmed in Fort Worth and Houston, Texas.)This poster advertises the premiere, at New York’s Zigfeild Theatre; a two week engagement beginning April 15, 1974.  Printed on thin newsprint-like stock, this classic poster is in mint condition and measures 10 1/2″ x 34 1/4.”  Ticket 3″ x 2″, in excellent condition.