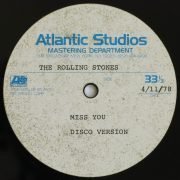 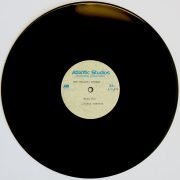 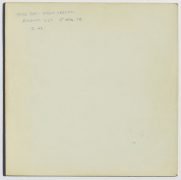 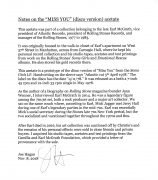 As the accompanying letter of authenticity from author Joe Hagan explains, in part, This acetate was part of a collection belonging to the late Earl McGrath, vice president of Atlantic Records, president of Rolling Stone Records, and manager of the Rolling Stones, 1977 to 1983.  It was initially housed in the walk-in closet in Earl’s apartment, where he kept his personal record collection, studio tapes, acetates and test printings from work on the Rolling Stones Some Girls and Emotional Rescue albums.  This acetate is a prototype of the disco version of “Miss You” from the Some Girls album.  Handwriting on the sleeve says “Atlantic cut 5th April 1978”. The label on the disc has the date 4/1/78”.   It was released as both a 7-inch 45rpm and a 12-inch 33 rpm single in May 1978. As the author of a biography on Rolling Stone magazine founder Jann Wenner, I interviewed Earl McGrath…[and] after Earl died in 2016…I acquired his studio tapes, acetates and test printings from the Camilla and Earl McGrath Foundation.”

The 12″ disc has has a label from the Atlantic Records Mastering Studios dated April 11, 1978 (the single was released in the US May 10 and the UK May 26, 1978).   “Miss You” became a worldwide smash for the Stones, topping the Billboard Charts in the US, and reaching #3 in the UK.   The acetate is in EX/EX- condition and sounds fantastic.