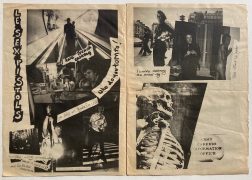 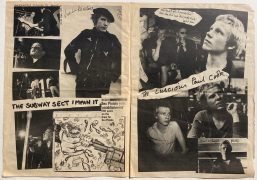 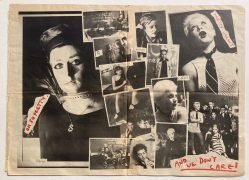 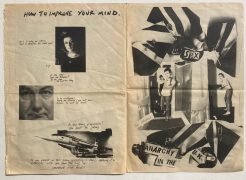 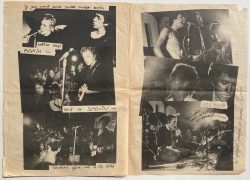 A clean, unused copy of the Anarchy in the UK newspaper (AKA Anarchy No. 1), sold as a tour program for the ill-fated 1976 Sex Pistols UK tour.

This twelve page newspaper was designed by Jamie Reid, Sophie Richmond and Vivienne Westwood, published by Pistols management company Glitterbest, Ltd., and printed by UK magazine ZigZag.  Originally this was intended as the first in a series; however only this edition was completed.  Copies were sold on some dates on the Anarchy in the UK Tour (which also featured the Clash, the Damned, and Johnny Thunders and the Heartbreakers,) but many of the dates of this tour were cancelled because of the controversy surrounding the Sex Pistols.

In very good+ condition with a flattened horizontal crease (as most copies have), some minor handling and creasing, a few pages with minor edge tears, a 1″ square missing piece from the edge of the back page (not affecting any images).  12 3/4″ x 17 1/2″