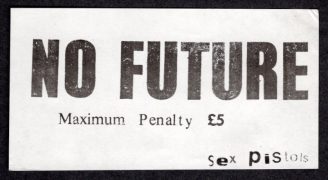 “God Save the Queen” was released during Queen Elizabeth II’s Silver Jubilee; the record’s lyrics and the sleeve’s artwork were controversial, and the BBC refused to play it.  The song reached #1 in the NME charts, but only made it to #2 in the official UK Singles chart, leading to accusations that the chart had been fixed to prevent the song from reaching #1.
The larger handbill/sticker pictures Queen Elizabeth with a safety pin in her mouth, and the famous lyric “God Save the Queen, she ain’t no human being,” and measures 4 1/8” x 5 1/2”.  The smaller “No Future” handbill, utilizing the refrain (and original title) of the song, measures 5 1/4” x 2 3/4.”  Both are in unused, near mint condition—the Queen handbill has a tiny, barely noticeable crease in the lower left corner.
With Recordmecca’s written lifetime guarantee of authenticity. (Note: Two sizes of the Queen handbill/sticker were produced, we have the larger one listed elsewhere).