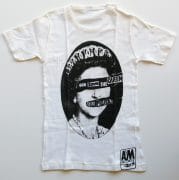 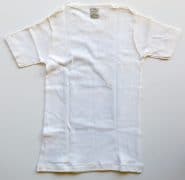 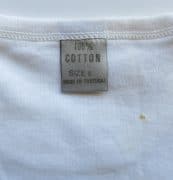 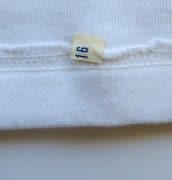 An impossibly rare, never-worn Sex Pistols/A&M Records “God Save The Queen” T-Shirt, with impeccable provenance.  This is the rarest Pistols shirt, and this example was given to Lee Kaplan, then of Los Angeles’s Rhino Records, by Rory Johnston, the  U.S. representative of Pistols manager Malcolm McLaren.

Kaplan and Recordmecca owner Jeff Gold, also a Rhino employee at the time, were friendly with Johnston and both big fans of the Sex Pistols debut single, “Anarchy in the U.K.”  Johnston was a frequent visitor to the store, and in March 1977, upon his return from London for the Pistols’ A&M signing, gave each an A&M/Pistols shirt.  Gold wore his frequently, and lost it decades ago.  Lee Kaplan correctly assumed the shirt would become valuable, as the Sex Pistols were dropped by A&M after only six days, and didn’t wear his, carefully preserving it instead.  We offer his example here.

In his accompanying letter of authenticity, Kaplan writes: The shirt was a gift from Rory Johnston, the Los Angeles representative of Glitterbest, Malcolm McLaren’s management company at the time he was involved with the Pistols.  In one of the band’s more notorious self-destructive ploys, the group became so drunk, violent and out of control at the signing party and celebration afterwards that the label’s managing director chose to buy out their contract and drop them the following week… The image of course is Jamie Reid’s manipulation of an official Cecil Beaton portrait of Queen Elizabeth.  Glitterbest was responsible for producing and fabricating the shirts.  Rory received a batch of these prior to the band being notified their contract was terminated.  He came by Rhino Records (where both Jeff Gold and I were working) a day or two later and gave the employees A&M shirts and some other swag…”.

The shirt is printed inside out on a size small, 100% cotton tee, made in Portugal.  It measures 14 1/2″ armpit to armpit, and 24″ from collar to bottom.  In Near Mint, unworn condition, with one small match head sized age spot on the back.  This will frame beautifully (we don’t recommend wearing it, as it will negatively affect the value.)  In the 41 years since this was made, we have seen no other authentic examples offered for sale, in any condition (bootlegs do exist however).  A museum quality punk collectible.