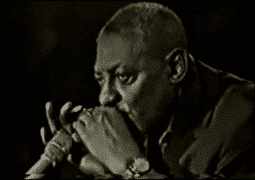 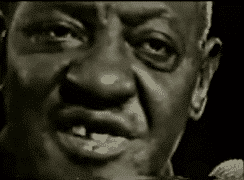 A handwritten, signed letter from Blues giant Sonny Boy Williamson (Sonny Boy II, aka Alex Miller) to an English Fan.  We obtained this from the son of the fan, who in an accompanying two-page letter of authenticity explains that in mid 1964 his mother met Williamson at the filming of the legendary Granada Television program “I Hear The Blues”, which featured Williamson, alongside Muddy Waters, Memphis Slim, Lonnie Johnson, Victoria Spivey and others (the full show is available on Youtube, and highly recommended).

Williamson asked the fan for her address, and she soon received this letter, which reads in full (with Sonny Boy’s uncorrected spelling) “Dear Hilda Seddon, My dear darling, just a few line to let you know I got home OK with you in my hart all the way.  So I am asked to send me one of your picturs please darling I do hope you made it home OK to.  So I looking to hear from you soon.  I heating (hating?) to leave you las night you was looking so good to me baby.  So be a sweet darling fo rme for every your baby, Sonny Boy Williamson”.

Williamson died in 1965 and his autograph alone is very rare; this is only the second Williamson letter we’ve had in 40+ years of collecting.  8” x 10” with folds and a 1/2” edge split on the fold.  With Recordmecca’s written lifetime guarantee of authenticity and a two page letter of authenticity from the son of the original recipient..