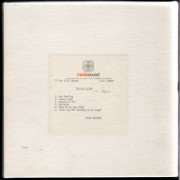 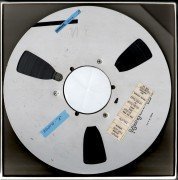 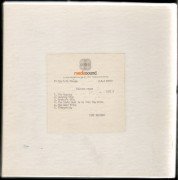 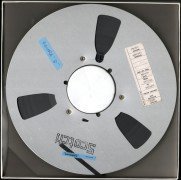 A truly incredible Talking Heads collectible–the original master tapes of their live concert recorded December 18, 1978 at the Agora Ballroom in Cleveland, Ohio. This was eventually released as a promotional-only live album, as part of the Warner Bros. Music Show series, but these tapes include a live version of ‘Thank You For Sending Me an Angel’ that has never been released.

We acquired these from Talking Heads producer/engineer/mixer (and all around great guy) Ed Stasium, and included is his signed letter of authenticity detailing the history of the tape, as well as a high resolution digital transfer on CD made by Ed.

As Stasium notes in his letters of authenticity (one for each 10″ reel) “This show as recorded live at the in-house studio at the Agora Theatre in Cleveland, Ohio during the band’s performance on December 18, 1978 in “the Lounge” at Mediasound NYC. We spent several days mixing the project and the band had a good amount of input to the mix, requesting many effects in the mix as opposed to keeping it live “off the floor.” This is one of my favorite projects. Warner Bros released it as part of the “warner Bros Music Show” entitled “Talking Heads Live On Our.” Reel Two includes “Thank You For Sending Me An Angel” that was omitted from the vinyl release.”

As Ed explains in an accompanying document, tapes from the 1970’s need to be “baked”–or heated in a controlled envoirnment–before playback; the binder used to attach the magnetic particles to the backing can be unstable after many years. Ed baked this tape before transferring it digitally in his recording studio; we suggest the owner not try to play it.

This auction is for the two tapes, transfer and documentation, sold as a collectible only. No rights of reproduction or copyright are included or inferred. As illustrated below, we have commissioned a frame for this tape which can be hung on the wall or displayed on a table. The frame can easily be slid open and the tape removed. The frame is shown only as an example of how this tape might be displayed and is NOT INCLUDED but can be ordered separately.