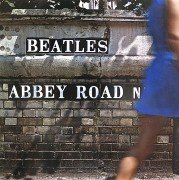 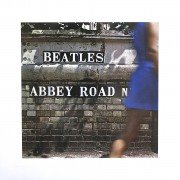 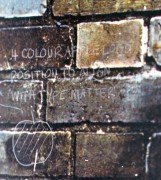 An original Dye-Transfer photograph used in the production of The Beatles’ Abbey Road album cover, with a letter of authenticity from the original photographer.  Scottish photographer Iain MacMillian (1938-2006) was asked by John Lennon to shoot the Abbey Road cover after he’d photographed Yoko Ono’s art exhibit at the Indica Gallery.

As MacMillian’s signed letter of authenticity notes, this is a “Trial Dye Transfer Print” for the back cover of Abbey Road.  Dye Transfers are hand-made and extremely expensive photographic prints which yield the brightest colors possible. MacMillian and album creative director John Kosh added the word “Beatles” in faux tiles to this photograph to match the Abbey Road street sign, which is clearly visible in this unretouched print.

The print is in perfect condition with extremely bright colors, much more so than on the printed album cover.  The image is 14 3/4″ square, on 19 3/4″ square photographic paper.  From very close up and at an angle you can see, lightly impressed into the print, an Apple Records logo and the words “4 color Apple logo, position to align with type matter.”  This would indicate there would have been an acetate or vellum sheet covering the print, with this notation written on it, so the band and art director could approve the position of added type.  This is extremely difficult to see; the image to the left was enhanced to make it more visible.

MacMillian worked with John and Yoko for several years, contributing to the  artwork for the single “Happy Xmas (War is Over) and the albums Live Peace in Toronto, Some Time in New York City and the Wedding Album.