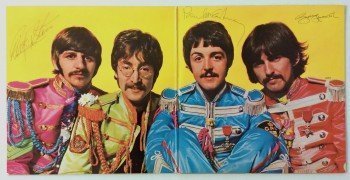 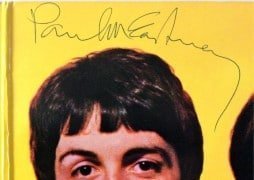 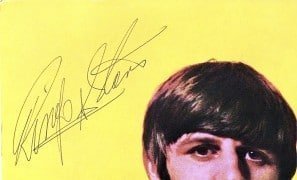 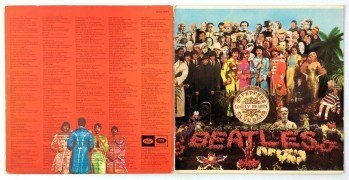 A truly exceptional Beatles collectible — a copy of Sgt. Pepper’s Lonely Hearts Club Band beautifully signed by Paul McCartney, George Harrison and Ringo Starr for Beatles publicist and longtime associate Derek Taylor.  Signed copies of Sgt Pepper’s with the autographs of all four Beatles have previously sold for $200,000. – $250,000.  While this copy lacks Lennon’s signature, it is priced at 1/10 the cost of a fully signed example.

This U.S. Capitol album has been authenticated by Frank Caiazzo, the world’s foremost expert on Beatles handwriting and autographs.  Caiazzo’s accompanying letter of authenticity reads, in  part:

This purpose of this letter is to serve as authentication of the signatures of Paul McCartney, George Harrison and Ringo Starr.  These signatures are found on the inside gatefold of a U.S. Capitol Records late 1970’s issue “Sgt. Pepper’s Lonely Hearts Club Band” album cover.  All three have autographed this album cover beautifully above their respective images…The autographs were obtained individually by former Beatles press officer and ‘inner circle member’ Derek Taylor, and given as a gift to a longtime senior executive in the music business who befriend Taylor when they both worked together at Warner Bros. Records.  The signatures were obtained by Derek in the late 1980’s, and each represents an excellent and complete example from the period, signed as nicely as they could have for their close friend.  “Sgt. Peppers’ Lonely Hearts club Band” is one of the most desirable LP titles of all time to have signed, and this one is fabulous in every respect, in light of its exceptional provenance.”