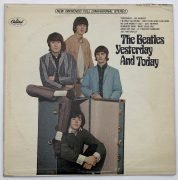 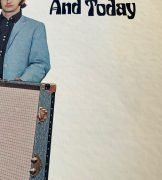 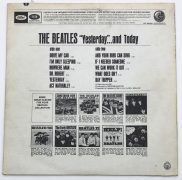 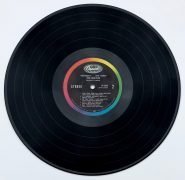 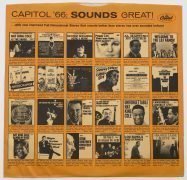 First state ‘Butcher Covers’ were never pasted over, while ‘second state’ albums have the replacement ‘trunk’ cover pasted over the offending “butcher” slick, with the “V” from Ringo’s butcher smock slightly visible to the right of the top of the trunk.  ‘Third state’ are second state ‘pasteover’ copies where someone has attempted to peel off the trunk cover.

Stereo Butcher covers are much rarer than mono copies, and second state butchers are more scarce than ‘peeled’ third state  covers, as nearly everyone who found one tried to peel it, with varying degrees of success.  This a #5, indicating it was printed in Los Angeles. The original owner has peeled back a small bit of the trunk slick on the top right and bottom left corners, and at the top middle to confirm there was a butcher cover underneath, but the front slick is fully present, and no damage was done to the butcher slick underneath.

With an original first pressing disc in G+ condition, and Recordmecca’s written lifetime guarantee of authenticity.