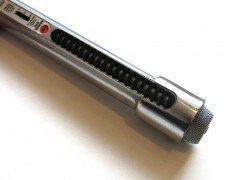 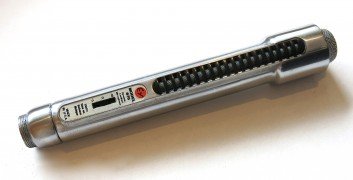 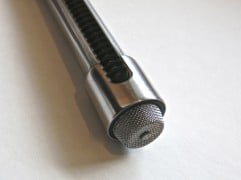 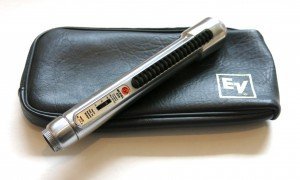 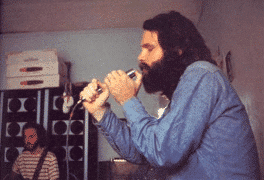 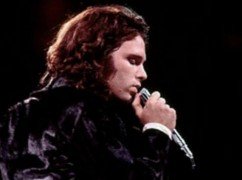 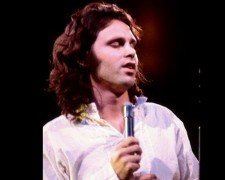 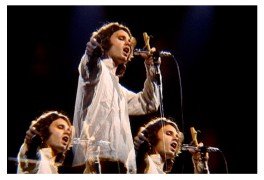 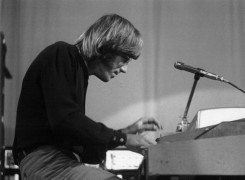 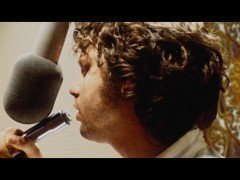 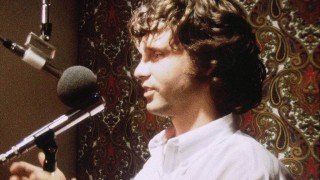 An Electro Voice EV-676 chrome microphone, one of five used by Jim Morrison and Ray Manzarek during live concerts, rehearsals and television appearances by The Doors. The microphone is in excellent working condition.

Jim Morrison can be seen using an EV-676 chrome microphone in video performances and numerous photographs, including those shown below. Included with the microphone is a signed, limited edition photograph by Frank Lisciandro showing Morrison using one of the chrome EV-676’s during the filming of the 1969 public television program Critique.

We acquired this microphone from longtime Doors road manager Vince Treanor III, who built the group’s legendary stage amplification system. Treanor kept this and a number of other Doors microphones for more than 45 years, and in 2014 sold the complete collection to Jeff Gold of Recordmecca.

The following is excerpted from Vince Treanor’s letter of authenticity for the Doors microphones:

The EV-676 silver units were (then) used by Ray Manzarek and as drum microphones. They were used until 1972.01 in Palm Springs. They were withdrawn from service in 1972.03.

In Treanor’s letter and various emails, he explained in detail the provenance of this microphone. When Treanor took over as road manager of The Doors in January 1968, he replaced the Shure mics they’d been using with EV-676’s. Morrison used a chrome EV-676 for a short time, but soon switched to a gold plated model, which became his primary microphone for concert performances.

Numerous photographs exist showing that Morrison continued to used chrome EV 676’s on occasion during rehearsals, as a microphone to hold during recording sessions (the recording mics were too delicate to grip,) television broadcasts and occasionally for live performances. It is likely each of the chrome EV’s purchased from Treanor was used by Morrison and Manzarek at some point as a vocal microphone.

Treanor noted the microphones used by The Doors during his tenure were purchased “by me and with my own funds” at Yale Radio. Treanor also owned the mic stands, sound mixers and the telcom (telecommunications) system used by The Doors. When The Doors weren’t working, Treanor occasionally did sound for other acts, and he wanted to be able to use the microphone system on these occasions.

Treanor was a consultant to the Oliver Stone film “The Doors,” and lent the production some Doors mics and mic stands, which were used during filming. He has lived in Southeast Asia for many years, but kept his equipment in storage in Los Angeles. When his storage was recently moved, the chrome EV-676 microphones were located among his other possessions, and sold to Recordmecca.

This is a rare opportunity to obtain a microphone used by The Doors, with impeccable provenance. Included is a copy of Vince Treanor’s letter of authenticity for all of the Doors microphones, and Recordmecca’s written lifetime guarantee of authenticity.

The microphone is in excellent working condition, with expected light scratches from use. With the original EV vinyl pouch, and an 8” x 11” color photograph by Jim Morrison’s friend Frank Lisciandro, titled ‘Jim Morrison “Critique” 2’ and numbered 8 of 77. Photograph in mint condition, matted to 11” x 14”. Photograph copyright Frank Lisciandro. (Note: The first photograph shown, with Morrison wearing a brown jacket and holding a cigar and the microphone, is the one included in this sale. The other photographs are shown to illustrate Jim Morrison’s use of chrome EV-676 microphones.)

See our other listings for an AKG Microphone also used by The Doors.