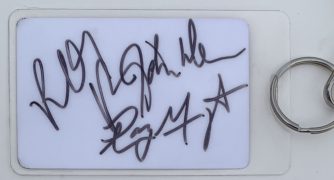 A backstage pass from the VH1 Storytellers program The Doors: A Celebration, autographed on the back by Doors members Ray Manzarek, Robby Kreiger and John Densmore.  This pass is from the collection of longtime Doors associate and manager Danny Sugerman (1954-2005).

For the show, the surviving Doors invited a variety of singers to perform 8 Doors classics, including Perry Farrell of Jane’s Addiction, Pat Monahan from Train, Ian Astbury of The Cult, Travis Meek of Days of the New, Scott Weiland of Stone Temple Pilots, and Scott Stapp of Creed.

Danny Sugerman met and began working for The Doors at the age of 13, first handling fan mail and organizing their clippings and scrapbook, and later writing press releases.  He was close to Jim Morrison, and after Morrison’s death, became Ray Manzarek’s manager, and then manager of The Doors, overseeing their catalog releases and legacy.

Sugerman wrote several books about Morrison and The Doors, including the aforementioned Morrison biography No One Here Gets Out Alive, The Doors: The Illustrated History, and his Doors-heavy autobiography Wonderland Avenue. He was a consultant to Oliver Stone for the film The Doors.

We acquired this pass directly from Danny Sugerman’s widow, Fawn Hall; its exceptional provenance will be noted in Recordmecca’s written lifetime guarantee of authenticity are included.