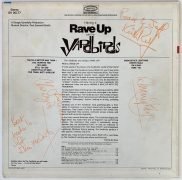 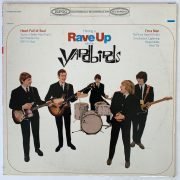 A copy of Having a Rave Up With the Yardbirds autographed in 1967 by group’s final lineup: Jimmy Page, Keith Relf, Jim McCarty, and Chris Dreja.

We purchased this from a collector, who obtained it from the person who got the autographs.  He explained:

I first met the band in 1967 backstage at the Fillmore.  As a teenage disc jockey I had backstage privileges.  Their performance that night was jaw dropping amazing, as usual.  Jimmy Page had replaced Jeff Beck on lead.  As we talked after the show, I told them I was from Sacramento, Ca.  And somebody said they were playing Sacramento in a few weeks and why don’t I come visit them.  You better believe I took them up on that offer!  We arranged to meet at the Governors Hall on the State Fairgrounds at load-in time the afternoon of the show.  My cousin and I hooked up with the road manager and another roadie [the band arrived prior to sound check].  We helped them load in, stayed through the sound check, the actual dance-concert [yeah, amazing again!] and through load-out.  At the Fillmore as well as at Governors Hall I remember I mostly talked with the road manager, Keith Relf and Chris Dreja.  I spoke some with Jim McCarty.  All very nice and open guys.  Page seemed to keep to himself.  I remember him sitting on the sofa as I talked nearby with the other guys.  Their way cool autographs read: “Peace to Jeff Keith Relf”, “Jimmy Page”, “Best wishes Chris Dreja” and “Best wishes to Jeff Jim McCarty”!

Both the cover and disc are in Excellent+ condition; the bold, unfaded signatures are in orange felt tip pen.  Very few signed Yardbirds albums exist, and this is the only one we’ve seen signed by the Jimmy Page lineup.  With Recordmecca’s written lifetime guarantee of authenticity.