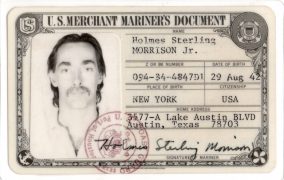 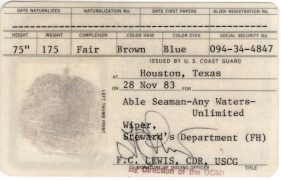 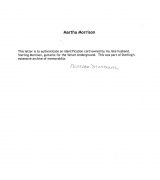 This ID card is dated November 28, 1983, and gives Morrison’s home address in Austin.  His photograph is on the front, as is his ink signature and an official Coast Guard stamp.  The back gives his vital statistics, notes he is an “Able Seaman–Any Waters–Unlimited” and “Wiper, Steward’s Department (FH).”  It is signed by a Coast Guard official.

We acquired this document from Sterling Morrison’s widow, Martha Morrison; her letter of authenticity is included, as is Recordmecca’s written lifetime guarantee of authenticity.  A one-of-a-kind Velvet Underground collectible.