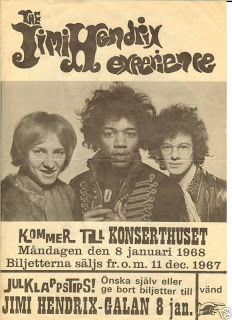 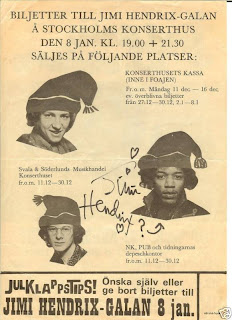 Though I’ve been collecting records and memorabilia since 1971, I still can’t wait for the mailman (or Fedex) to arrive on days when I’m expecting something new and groovy. This was very much the case a few days ago, when this most amazing handbill arrived. It advertises a January 8, 1968 concert by the Jimi Hendrix Experience in Stockholm, Sweden. My Swedish friend, Johan Kugelberg, kindly translated it:

“The Jimi Hendrix Experience are coming to Konserthuset (the venue) Monday, January 8, 1968. Tickets available from the 11th of December, 1967. Christmas gift suggestion ! Wish for tickets or give as a gift to others. The Jimi Hendrix Gala, January 8.”

I’ve seen a lot of holiday promotions before, but Jimi Hendrix tickets for Christmas ? I certainly would have been happy had I found them under the tree. The back side lists three locations where tickets were sold, and as you can see, the designer took the Christmas motif perhaps a bit too far, adorning Jimi, Mitch and Noel in Elf hats. Jimi signed this handbill, but drew a question mark and arrow to his own image, no doubt a bit confused by his head gear.

I got this from a gentleman who’s mother got the autograph. It’s almost too much to contemplate–having a mother who went to see Jimi Hendrix in 1968, somehow got backstage and got his autograph (on a handbill yet !), saved it for 41 years, and then gave it to her son. Now that’s a record collector’s dream.
.