Jazz giant Charlie Parker was born August 29, 1920; one hundred years ago tomorrow.  The worldwide celebrations marking his centennial show just how much of a mark he made on music in his short 34 years on the planet. 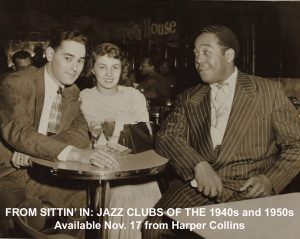 Parker looms large in my forthcoming book, Sittin’ In: Jazz Clubs of the 1940s and 1950s (released Nov. 17 by Harper Collins).  I’ve just launched a website for the book with sample pages and excerpts, and a companion playlist but today I thought I’d share this fantastic photo of Bird posing with two fans at New York’s Royal Roost in the late 1940s.

I was incredibly fortunate to interview jazz giants Sonny Rollins and Quincy Jones for the book, and this photo is a small illustration of how, as they told me, jazz clubs were among the first places in Jim Crow America where Blacks and whites mixed, in audiences and on-stage.  Sonny said “jazz was really where the racial barriers were broken down heavily.”  Quincy offered “Back then, it wasn’t about color in the clubs, it was about how good you can play. Racism would’ve been over in the 1950s if they’d listened to the jazz guys.”

More on the book later.  Today, I’m going to listen to some Bird. 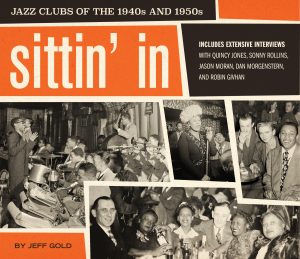 Congratulations on the book Jeff. Looks like a great one.
I look forward to reading it and talking with you about it.

Great news Jeff! Congratulations on the book. It looks lovely my friend. The Charlie Parker photo is really great.

Congrats on your upcoming book!
Looking forward to it, and wishing you much success.
Going to put an announcement on my thread about it now.

Hope your well, I’m hanging in there.
Stay safe..