Hello everyone, I hope you’re all well, washing your hands frequently, and staying sane.

I’ve been meaning to write about the proliferation of fake sealed records being offered on EBay, particularly ones with bogus “hype stickers”. 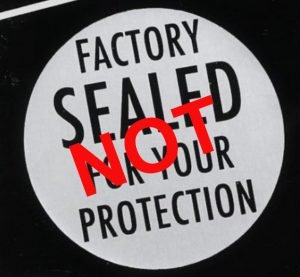 Resealed records have always been a problem.  In the 70’s, I was friendly with an employee at Tower Records on the Sunset Strip, which had a shrink wrap machine in the back room, and a general manager who claimed “there’s no such thing as a defective record.”  I was in Tower’s back room any number of times while employees resealed “defective” records that had been returned to the store. These machines would seal records in loose plastic wrap, and then employees would ‘shrink’ the wrap by quickly moving an industrial strength hair dryer back and forth over the shrink.

Of course shrink wrap machines were used for legitimate reasons too, primarily by US record stores to seal expensive import albums, which were sold in Europe unsealed.  ‘Imports’ sold for premium prices, so stores ‘loose sealed’ them, for protection, and to identify them as imports.

Knowing how easy it is to reseal a record, I’ve never understood why people pay high prices for ‘sealed’ albums.  The same goes for open albums with intact shrink wrap–when I was a teenager, we used to slide the shrink wrap off albums we didn’t care about, and ‘transplant’ it onto other records we wanted to protect.

As prices for sealed records rose dramatically, so did fraud, with unscrupulous sellers resealing clean records and selling them as ‘factory sealed’.  Sometimes they would make fake ‘breathe holes’ in the shrink too.  When I saw an expensive ‘sealed’ record I wanted for myself at a store or record show, I’d buy it with the understanding that I could open it in front of the seller, to insure it was in mint condition, and not a ‘re-seal.’

In the past 10 years or so, people have also begun to pay premium prices for sealed albums with ‘hype stickers’, the record store or distributor stickers usually with wording to the effect of “Featuring the hit single…”  And of course with premium prices, again came fraud.

For the past few years, a number of sellers on Ebay have been getting very high prices for a seemingly unending supply of ‘sealed’ albums with ‘rare hype stickers’.  Sometimes these stickers are ‘previously unknown’.  There’s a good reason for that–it’s because the vast majority are fake. 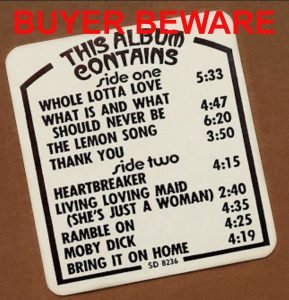 It’s not that difficult to find a clean copy of a scarce album to reseal.  Then with a scanner and desktop printer, it’s easy to either reproduce a rare sticker, or with a modicum of design talent, create your own ‘previously unknown’ sticker.  And that’s exactly what is happening, on a relatively large scale.  Every week I see lots of resealed albums with fake stickers selling on EBay, and shake my head at the poor people who are getting taken.

This has been a big topic of conversation among dealers, including my good friend Gary Johnson, of Rockaway Records.  Gary recently sent me an EBay listing for a supposedly ‘sealed’ album with a rare hype sticker and a Rockaway price tag, noting  “I assume that the only real thing in this listing is my 2018 price sticker.”  He noted some of these sellers “attach genuine vintage record store price stickers on their supposedly sealed albums to give the buyer “confidence”, but the reality is that it is simple (and common) to remove these stickers from other LPs in shrink wrap and place them on their “sealed” ones.  It amazes me how these guys keep finding new suckers. All one needs to do is look at the seller’s other items and see an amazing amount of sealed albums. None of them have any relationship to each other (same label, store, etc). Common sense should prevail, but I guess it doesn’t.”

I agree. There’s no easy way to tell if a record is resealed or a sticker is fake from a small internet photo.  But I encourage everyone to be exceedingly skeptical.  Check the seller’s feedback, past sales, and other items; if they’re offering many other similarly rare sealed albums with stickers, that’s a big red flag.  I’ve been collecting records for nearly 50 years and can promise you, these just aren’t that common.  Look at how long the seller has been in business.  A few of the sellers of fakes have changed their Ebay ID, more than once.  And most important, as I always say, any honest seller will happily give you a written lifetime guarantee of authenticity. If you’re buying something expensive, insist on this.

I’ve written about the proliferation of fake acetates on EBay.  Fake sealed records with bogus ‘hype stickers’ are becoming a big problem too.  There are of course genuine sealed albums with hype stickers.  But I wouldn’t be buying them off Ebay without spending some time vetting the seller, making sure they don’t have an endless supply, seeing if they’ve sold rarities other than sealed albums, and most important, insisting on a written lifetime guarantee of authenticity.

The great Richard Morton Jack of Flashback Magazine has written a highly recommended post about this topic, with illustrations, on his Galactic Ramble blog.

Stay safe and healthy everybody!

All of it’s true-having worked in records stores in the 80’s, it was referred to as “Repositioning”.