Here’s an article on the revival in poster collecting in The Guardian (the UK newspaper,) featuring an interview with yours truly:

Would you pay six figures for a vintage rock poster? Dave Simpson on a booming market 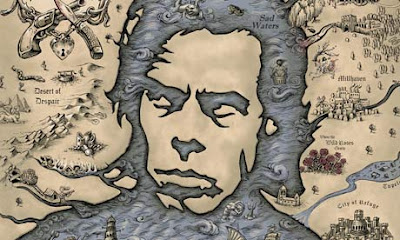 Highly sought after . . . a detail from Emek’s 2006 Nick Cave poster, which took three months to complete.

Uncertain economic times have led increasing numbers of people to turn to rock memorabilia, and to rare posters in particular, as an alternative form of investment. Some of the figures involved are eye-watering, with the biggest prices fetched by vintage artwork, what Gold calls “snapshots of an era”. For years Elvis posters were the most highly sought after (particularly the year 1956), selling for up to $30,000. Then, in 2004, a poster for the Beatles 1965 Shea Stadium concert sold for $69,000 at auction; a poster for their 1966 gig at the same venue fetched $132,000 later that year.

Now contemporary posters are fetching silly sums, too. A Citizen Kane-style poster for a White Stripes’ 2003 gig by Chicago artist Rob Jones sold on the night for £15, but fetched £1,600 on eBay in 2008. “Each [poster] was done in a limited edition of 333, for every concert, and there won’t be any more,” explains Jody Goodall, director of Manchester’s Richard Goodall gallery.

Goodall recently sold a poster for Nick Cave’s 2006 gig at the city’s Bridgewater Hall for £500, 10 times the original price. Naturally, it’s no ordinary poster. “It’s hand-drawn by Portland-based artist Emek and took him three months to complete,” Goodall says. “Every detail relates to a Cave song [roses for Where the Wild Roses Grow, and so on]. It’s one of a limited run of just over 300, of which only a handful are in circulation.”

The market in poster art is nothing new, but the web has turned a trend into a boom. As Gold explains: “You can find immediately something you’d previously see once in a lifetime.” A poster’s collectibility lies in a combination of band, artist, venue, the condition and the scarcity of the work. Sixties artist Rick Griffin’s posters for the Grateful Dead fetch huge sums, as long as they are from the initial print run. Identifying such rare posters can mean determining the exact shade of colour, or using a micrometer to measure the thickness of the paper. “The difference can be thousands of dollars.”

Poster art went into decline in the 1980s, but there was something of a renaissance towards the end of that decade, when Texas artist Frank Kozik started producing posters for underground bands: the Backyard Babies, early Nirvana. As quickly as these posters went up, kids tore them down. Some American artists – Emek, Rob Jones, Chicago’s Jay Ryan – are as collectible in their own right as the featured bands.Many contemporary designs are undeniably beautiful. Gina Kelly, who has designed posters for Stornoway and Bonnie ‘Prince’ Billy, says: “I focus on qualities like innocence, joy, psychedelia to make an image that I feel speaks to the band’s audience.” One of Jody Goodall’s favourite designs is Jay Ryan’s Kings of Convenience poster, featuring bears drinking tea in a tree. “Nothing to do with the band, it’s just a quintessential, eccentric image.” (He’s offering it for £200.)

In the end, of course, a poster is only worth what someone will pay for it. Gold suggests that the closest thing to a surefire investment today would be a poster for Nirvana, “the 90s generation’s Jimi Hendrix”. Goodall argues that in 30 or 40 years’ time, punk-era posters or those for Manchester’s Hacienda will be the most highly sought after. Not every one of them, of course. “We always tell people, ‘If you’re going to buy one, love the poster,'” he says. “That way, if it doesn’t appreciate in value, you’re still happy.”

Great article Jeff! And very well deserved as well! Well done my friend! they should have put a picture though…a picture of you and your collection, or part of it…:)! Best, Nuno