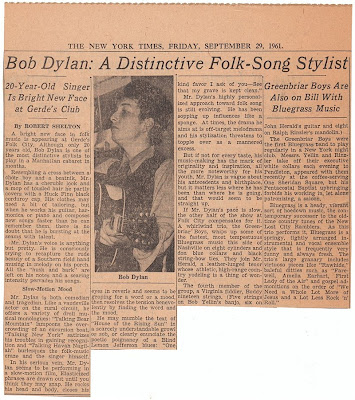 Above is the first article ever written about Bob Dylan; a rave review in the New York Times by music critic Robert Shelton, written a mere 7 months after Dylan arrived in New York (and only 3 months after the young Bob Zimmerman began calling himself “Bob Dylan.”)

According to Clinton Heylin’s excellent “A Life In Stolen Moments/Bob Dylan Day By Day: 1941-1995,” it was on January 24, 1961 that the nineteen year old Dylan arrived in “a snowbound New York, accompanied by his friend Fred Underhill. He heads for the Cafe Wha. It is a hootenanny night, and he performs a couple of songs. The Wha’s owner, Manny Roth, asks the audience to provide them with a place to stay for the night.” The next day Dylan traveled to Greystone Hospital in New Jersey to meet his ailing idol, Woody Guthrie, suffering from the hereditary disease, Huntington’s Chorea. Meeting Guthrie is the ostensible reason that Dylan headed East.

It’s rather astounding to see, then, that in 7 short months Dylan had developed to the extent that Shelton–the nationally known music critic for the most important newspaper in the United States–devoted the majority of his review to Dylan, the opening act for the much more established Greenbriar Boys. And Shelton was so confident about the talent of this virtual unknown that he wrote “it matters less where he has been than where he is going, and that would seem to be straight up.” You’ve gotta hand it to Robert Shelton–he truly got Dylan, and he wasn’t afraid to say it.

I love reading articles like this, which show what people were saying as events were unfolding–before the revisionist history set in. I’m fortunate to have a very large archive of early Dylan articles, thanks largely to the prescience of two very early Dylan supporters, the late San Francisco music critic Ralph J. Gleason and the late 16 Magazine editor Gloria Stavers. Both collected clippings on Dylan for their files, and I was fortunate to buy their collections. Someday I hope to publish a compilation of the best of these–but for now, I thought I’d share this most important one. With the hundreds of books, thousands of articles, and millions of words written about Bob Dylan, it’s kind of amazing to think–this is where it all began.
_________________

AND REMEMBER, WE’RE PAYING TOP PRICES FOR COLLECTIBLE RECORDS, CONCERT POSTERS AND OTHER MUSIC MEMORABILIA FOR OUR WEBSITE, RECORDMECCA. IF YOU HAVE SOMETHING TO SELL, EMAIL US AT Recordmecca@earthlink.net

Great post Jeff! What a classic rarity you have shared with us here. Thanks buddy.