I love collecting letters and documents that help tell the story of popular music, and thought I’d start posting a few of my favorites.  I buy this kind of thing whenever I can, keeping those that interest me most, donating the rest to archives that will preserve and share them–most often, the Rock and Roll Hall of Fame and Museum (which is opening their Library and Archives on April 9.) Here are two great ones, both with some insightful Bob Dylan content. 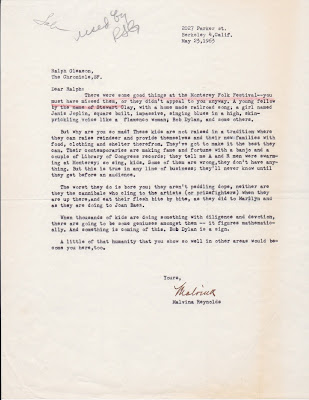 The first was sent by folk singer Malvina Reynolds (best known for her song “Little Boxes”) to San Francisco Chronicle music critic and Rolling Stone magazine co-founder Ralph J. Gleason, on May 23, 1963.  Written in response to what must have been a negative review of the Monterey Folk Festival, she notes “There were some good things at the Monterey Folk Festival–you must have missed them, or they didn’t appeal to you anyway.  A young fellow by the name of Stewart Clay, with a home made railroad song; a girl named Janis Joplin, square built, impassive, singing blues in a high, skin-prickling voice like a flamenco woman; Bob Dylan, and some others.”  She goes on to argue that Gleason missed the point of the festival, ending “When thousands of kids are doing something with diligence and devotion, there are going to be some geniuses amongst them–it figures mathematically.  And something is coming of this.  Bob Dylan is a sign.”

Boy, did she ever get that right.  At the time this was written, Janis Joplin was (forgive me) a complete unknown; she didn’t move to San Francisco and join Big Brother & The Holding Company for another three years.  I can’t imagine this wasn’t her first trip West.  And Dylan’s May 18 Monterey spot was his first West Coast appearance; according to Clinton Heylin’s excellent “Bob Dylan: Life In Stolen Moments” Dylan drove to Monterey with Elektra Records founder Jac Holzman and producer Jim Dickson; performing 3 songs at the Festival; almost surely “Talkin’ John Birch Society Blues,” “Masters of War” and “A Hard Rain’s a-Gonna Fall,” then dueting with Joan Baez on “With God On Our Side.”  Remember, this was 9 days before the release of “The Freewheelin’ Bob Dylan.” He too was almost completely unknown, and for Reynolds to invoke the genius-word was pretty prescient–and daring, indeed.

While I haven’t yet found Gleason’s review of the Festival, he later wrote that at first he didn’t get Dylan, thinking him a Woody Guthrie wanna-be.  But very soon after this was letter was written, Gleason embraced Dylan in a very big and public way, becoming a friend, confidant and very vocal and important early supporter. 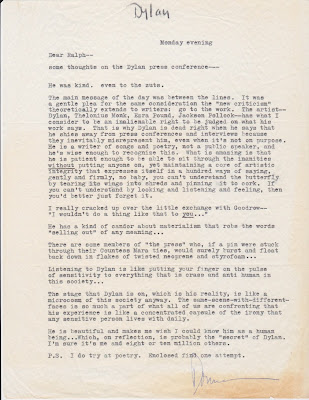 The second letter was also written to Ralph Gleason, this one on a “Monday evening” in December, 1965, from an unknown “Donna.”

She writes in response to Dylan’s legendary KQED Press Conference on December 3, 1965.  Gleason organized and hosted what became Dylan’s first and only televised press conference.  It’s available on home video and I’m sure online, and is a fascinating glimpse into Dylan’s psyche.  Donna writes to Gleason with her insightful take on Dylan and the press conference, and rather that excerpting her letter, I suggest reading it.  There’s an excellent and comprehensive website I can’t recommend enough for those interested in the press conference.

While letters and documents such as these might not have a great deal of monetary value, I think they’re  important in charting the arc of popular music.  If anyone reading this has any interesting letters, documents or files they are interesting in parting with (or any rare records or music memorabilia) please do email me.

Hi Jeff, these letters and documents are, indeed, amazing and invaluable pieces of popupal music history. And you're always the best resource to find these documents. I still treasure some Nico letters (to Danny Fields) that i bought from you ten years ago. Amazing stuff! Thank you for sharing this Jeff!! Best, Nuno

Jeff,
Have been following Record Mecca’s great “rescue work” of important rock artifacts and find your website a great research source. My wife and I are currently finalizing an article on Ralph Gleason to be published in the Journal of Popular Music and Society (and eventually be expanded into a biographical book) . We’re also documenting the location of as many key original documents associated with Ralph as possible, hopefully leading to their preservation for future researchers. We’ve found your listings one of the best sources of these and hope many of these items end up in a public collection.

I have a PDf of the Monterery Folk Festival referenced in Malvina’s letter and will send to you, really scathing and provocative, we write quite a bit about Gleason’s complex, evolving assessment of Dylan in the paper.